Added by Adam Sutton over 7 years ago

We're looking to replace the https://tvheadend.org frontend site with a new "sexy" design fit for the modern age.

We've had several people comment that redmine makes the site look a bit tired and some have even thought, at first glance, the project was dead.

If you're an experience web designer and fancy having a go at a new site design, put together a basic mockup and post a link in #hts (or on this thread).

The site will need to be a basic frontend explaining what TVH is, pointing to key resources, including github, user docs, wiki, forum and issue tracking (for now the last three will be kept under redmine, but it's not impossible we could change this).

It might also be worth considering a new logo design, so if anyone has any ideas for that, feel free to post here or #hts.

This is my proposal. It's a work in progress and if you want a different leading color, I will modify it

Added by Mark Clarkstone over 7 years ago

Thanks for your input Paweł, it isn't a bad design but it feels a bit obvious.

So what would be more appropriate?

Added by Mark Clarkstone over 7 years ago

Sorry I haven't replied until now, in fact I'm surprised no one else has (I'm not even a developer just an enthusiastic user)!

I suppose something a bit less obvious & maybe a logo that can be used without the Text?

Added by Hanspeter Müller over 7 years ago

What about something alike https://upload.wikimedia.org/wikipedia/de/archive/f/f2/20100214105716!Kabel_%26_Medien_Service_logo.svg, but with multiple in (that forms a T, and multiple out that forms a V?

Or, if you want it a bit nerdy, a TV with a Head inside, or a Head with a TV inside

Anyone has an idea what a professionally developed logo would cost? Is this something we could Crowdfund...?

From the logos above, personally i would prefer right/lower (simplest, uses less space, no shading, so it could also be used in Black-and-White).

And i would also like to add, the current logo ist very nice optically, it's just too elaborate/complex IMHO...

Maybe post this Logo-Contest on the Kodi Forum, there are some awesome guys who did new logos/animations for Kodi, maybe some of them also use tvheadend and woud be willing to do one for tvheadend?

This time only the logo without typography. However, I think that we need also a version with text.

Added by Poul Kalff over 7 years ago 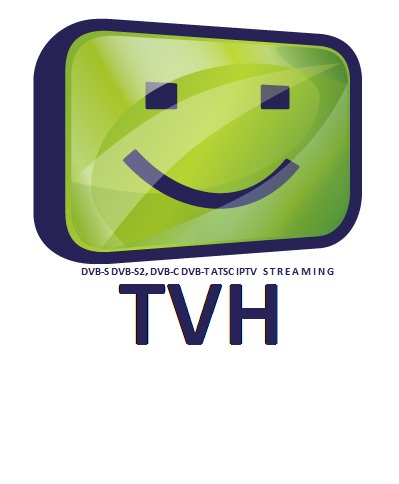 This is how the idea of the logo

Added by Jaroslav Kysela over 7 years ago

I like the picture, but the text is not very nice. Perhaps, move TVH to left and create a table (multicolumn) with features on right ? I miss also SAT>IP .

Added by Jaroslav Kysela over 7 years ago

Also - maybe the colors might be kept to the previous logo (brown/orange - but probably lighter / more saturated?) - see top/left corner on this page. I think that these colors are also unique, green/blue colors are used everywhere ;-) But it's just my opinion.

Added by Poul Kalff over 7 years ago

It is way to colourful for my taste, but the design is great. What about just adding the text to the right of it, like the first poster did?

Unfortunately on my hands, in the artistic and technical terms. The bear came.
If my idea that that is acceptable, though who knows how to revise.
Sorry for my English =)

Little test, 'compatible' with the Kodi logo. Inspirations are play / stop buttons, movie reels, eventually even possible to decent some letter 'V' (even 'T'?)..
Needs some tweaking and fine tuning, but the general principle is readable I guess.. :) 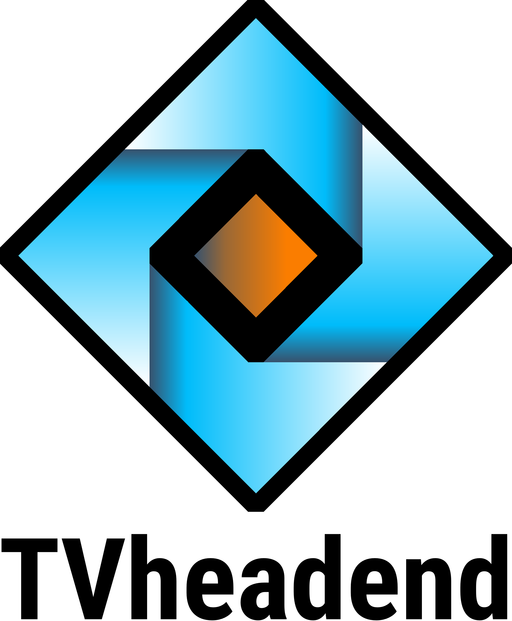 That's not too bad actually although IMHO the lines are just a little too thick, would love to see some variations!

Perhaps we should remind ourselves that there is a difference between graffiti, which is colourful and bombastic, and logos, which are simple in form and colour?
I can name no logos with more than 2-3-4 colours.... like Macdonalds, Facebook, Intel, Ubuntu, Shell....any car manufacture's logo.....Mercedes, Opel, VW, etc.
Kodi's logo is a logo, while this page looks like a wall in an urban area..... There is one logo on this page, though, it is in the top right, with the word "exsilia" next to it.

Yeah, just my humble opinion, but something to think about, at least...

Poul, I agree with your comments, went a little overboard (especially heavy in big sizes).
Mark, the lines are rather supposed to be contours (negative space) on same colour background.
Second and simpler test here, in smaller size to compare icon use:

I quite like those especially the white version, nice and simple. That would look nice animated (for use in videos etc).

Although the font I'm not sure of.

EXACTLY what I was talking about! Simple, beautiful, neutral colors (and not too many), looks a bit like the Kodi logo. I like it a lot. I vote for that one, espc. the black one (sorry, Mark! ;-) At the very least, it is a big step in the right direction, and something to inspire further ideas.

Happy New Year!
Glad to hear you like it

Check http://kodi.wiki/view/Official:Trademark_Policy_index
> Visual Identity Guidelines:
"Our logos are to be displayed in its entirety on either a solid light or dark background (avoid mid-tone or strongly colored backgrounds)."
So no choice for white or black necessary ;)
I completely agree about the font, it's just a temporary lazy indication where the wordmark would come (as i.e. the app icon would be displayed on Android).
I'll try to complete the logo with a better matching font soon.
PS. is there a place I can upload the stuff?

(No idea why it crossed the "Media center logos" line in my previous post, not intended.)

Upload it her, I guess?
I don't know if there is going to be a vote or whatever or if someone is going to make a decision somehow.
I don't really know who 'We' in "We're looking to replace...." are :-) Adam and Jaroslav, perhaps? I hope they will tell us how they want to proceede. I guess this was originally a discussion about a new website, and noone has said a word about that, at least not that I've heard, so maybe the logo-thing is tied up in that?

The font used is the freeware SciFly, available on:
http://www.fontsquirrel.com/fonts/scifly

Just not sure about the 'bicolor' text logo, maybe just orange is better..

Feel free to use it as is / make suggestions!

PS. Concerning the site itself, I have the feeling that changing the Redmine theme to something fresher, more modern and responsive (mobile use) would make a world of difference.
Changing the homepage to land on project info + news would make the project more accessible and look more 'alive'

Matt great work on the logo! And yes I think you're right all orange text does look better!

@Matti DH : Thank you for your work on logo. Could you put your copyright and licence (FreeArt?) to PDF (or any other format) ? From my view, your logo is my hot candidate for tvh 4.2. Thanks.

Added by Matti DH over 6 years ago

Hi, I gladly share the logo under a CreativeCommons
Attribution-ShareAlike license: http://creativecommons.org/licenses/by-sa/4.0/

Added by Jaroslav Kysela over 6 years ago

Thank you, again. The new icon is used in the 4.1 code since today.