Provides a configurable interface from providers to TVHeadend.

https://github.com/cabernetwork/cabernet/releases
Working on getting a service that will take the PlutoTV or XUMO server stream, clean it and feed it into TVHeadend and other DVRs (Also tested on Emby, JellyFin and Plex). It works on the subscription and free versions. Also it runs on Linux and Windows as a service. Windows has a installer. Once installed, setup is easy with TVHeadend.
1) Setup the automatic IPTV network (recommend new URL is http://[host]:6077/PlutoTV/channels.m3u)

Make sure to set the "Maximum # input streams". PlutoTV is set to a max of 4 and tvheadend uses 2 per tuner during initial screening. Doing a force scan will create the mux and service values. Also, turn View level to Advanced and set the Re-fetch period (mins) to a very large number. TVheadend has a tenancy to cause issues when channels change (Changed Services will not be mapped to channels). The Maximum Timeout is used to wait for a reply during a Forced scan. Recommend keep this low, like 15-20 seconds. Some of the channels may fail, but it is faster than having a high setting and waiting for all channels to scan. Just individually rescan those that failed by setting each mux back to PEND from IDLE.
2) Next you can setup the grabber. I use a URL grabber written in Unix bash and is an extremely small file. It can be found in the github repo at
https://github.com/cabernetwork/cabernet/tree/master/lib/tvheadend/service/Unix called tv_grab_url
Place the grabber file in the same location as the other TVHeadend tv_grab* files, change the permissions to executable and restart TVHeadend. This should allow TVHeadend to pickup the new grabber. While in the grabber list, make sure and disable any OTA grabbers. Stations no longer send this information and will only cause TVHeadend to use a tuner for scanning. Displaying the log window by clicking the three ^ in the bottom right is helpful at this time.

Have the grabber run and populate the EPG data into the EPG Grabber Channels tab. The log should show a quantity of channels were detected.
Pop over to the EPG Grabber tab and disable the OTA grabber cron. Also, update/replace the Internal grabber cron schedule using something like below. The example will pull the TV guide at 6:04am and 5:52pm. Add more if you need. It is recommended to use static cron times.

3) In the Channel view, select Map all channels.

This will tie the services, EPG and channels together, automatically. After this, re-grab the EPG data. This will populate the EPG tab with shows. For TVH version 4.3, the Number column will auto-populate. For TVH 4.2, you will need to manually add channel numbers.
4) Display the TVGUIDE. This appliance has special features which maps the tvheadend genre, giving colors on tvguides. It also has enhanced guide descriptions and optional additional channel notations if you use many streams. Below is the Kodi tvguide using the pvr.hts plugin. 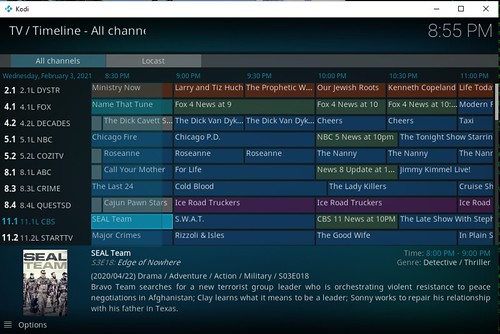 For Kodi, go to the settings for PVR and turn on the General setting "Use channel numbers from backend".

What should be my settings for Pluto TV? Because I can't seem to connect to any of the Pluto TV streams. I can connect to the USTVGO channels. Is there some special setting needed somewhere else to make it work?

Here is my configuration. Not sure if this is the best configuration but it works for me. I tend to record shows and then watch the recordings so the configuration is set to skip commercials so the recording does not have commercials. If watching a PlutoTV channel live the show will freeze for a couple of minutes during a commercial which may leave you to believe the playback is broken but it is not. When the commercial is over playback will resume.

I wish there was a Discord channel/server to discuss this because it is simpler for most since a lot of open source apps already use Discord and it is free.

PLEASE NO!!!! Discord is HORRIBLE to try to create a new account on. I have tried several times, even using invites, and I have never been successful. I don't remember if it was because they demanded a mobile phone number but if so, that's NEVER going to happen as far as I am concerned, especially to a company that uses artwork that looks like it was drawn by someone who was higher than a kite!

Discussion here is fine, we're already here and there is no reason to have to go anyplace else as far as I'm concerned!

FYI-- For those of you that have problems with USTVgo using cabernet, try a program on git made by benmoose39. Its called: benmoose39/ustvgo_to_m3u. Follow directions and load into TVH. There is minimal buffering with this and it loads into kodi within 4 seconds when using the TVH addon. Hope it works out for some of you. Not bad for freeware.

I am by no means a noob , but nor am I a dev. I hate Python it never works for me and always needs a dependency that can not be installed. To me it has always been a major waste of time. I would love to just run this on the pi from a python command line but that does not work either.

To be honest, the settings are so touchy in the Windows version changing most anything breaks it. That is no exaggeration.

Fixing the bind address from 0.0.0.0 in GUI to the real LAN fixed IP causes Cabernet to fail completely. I did find the config files (and you are correct the installer does ask where to put them) and deleted them to do a "clean" install. Before I did this I also confirmed that the bind address was correct. This all led me to the more problems below. Sometimes even reverting the settings to their original settings did not work, forcing me to remove the program then the settings folder and re-install. I think it might be best to have full explanation of what options are used or can be used.

Enabling the option you suggested does not work, the streams still stutter then freeze (burp then BARF) when I tested streams from VLC. I also tested some from NextPVR which would not play at all I would use TV headend but it has issues with probing for many of my important sources.

I also tested resync types "internal" "ffmpeg" and "default" although at default it always went back to "internal" . I did reboot after each change.

I also even tried Docker Desktop for Windows and Mac along the way. I suppose that too could have buggered the Windows machine. Unfortunately there are no real full instructions neither at docker nor on your site. There is a Docker Desktop tutorial but it does not even use the same docker command that is the single "pull" command you show on Github. I got lost in translation from what they say and what you say. I ended up with docker images that would not run so it might be nice to have more docs there.

XUmo never worked to any degree, (no channels ever in m3u files) and I have seen nowhere that says what I need to put (exactly) in the config.ini to make xumo work. I mean even if I could get xumo out of it, it would be worth the time spent.

Another issue that arose in the installation , and re-installation of Cabernet is that My windows 10 Machine has now completely lost its ability to switch windows. I can ALT Tab and see a window open, I can click an icon to open a new window but can never get to it. This is a relatively clean install of Windows 10 that I have only really used to run XAMPP web server on for a php code project of my own.

I think you also might want to to tell windows users to open ports 6077 and 5004 on their Windows Firewall.

The implication here is that this does work with TV headend but I would imagine you are not stuck with TV Headend 4.2 nor the Windows version of Cabernet. I am stuck with TVHeadend4.2 because my Pi is running Raspbian Stretch and will not install all dependencies for TVH 4.3 so I used the .deb installer for Pi. It just hammers the sources when scanning, causing all channels to fail.

Guess ill have to give up on this one as I have tried WIndows, Mac and Linux and two different ways of doing it on Windows and two on Linux. None of which seem to work for me. Even when it does run (Windows exe) the stuttering and freezing is not fixed.

Hi, this has been an useful tip, but when I try to use no filtering and syncing, the program pauses and resumes when the ads end as expected, but the audio es replaced by the audio of the ads of the previous ad break. I'm using jellyfin as a player, I've been trying to get pluto TV to work properly for a while now.

I suspect I already know the answer but would it be possible to use Puffer (https://puffer.stanford.edu/) as a source for Cabernet? I know it would not be a reliable source because it's limited to 500 viewers at a time, but its big problem right now is that first you have to log in (they only ask you to create a username and password, so not gathering personal info) and then you can try to play one of the streams, in theory if there are currently less than 500 users it will start sending a stream to you. And it says on their site, "Puffer works well in the Chrome, Firefox, Edge, and Opera browsers, on a computer or an Android phone or tablet. Puffer does not work on iPhones or iPads or in the Safari browser." So that is what you are dealing with, which is why I don't have high hopes. But it is the closest legal alternative I have seen to Locast. I would not put a LOT of time and effort into it because it's an "experiment" that could be discontinued at any time.